On 1/19/2021, we received two requests for service. One was submitted online and another was submitted via our hotline. The Diesel Suburban was stuck east of Fallon, on a sloped hill, in light snow and gravel. The driver notified some friends who brought 2 jeeps and attempted to help. They were not successful. A local community citizen saw the request for help and went after work. After some creative rigging due to weight differences, the Suburban got extracted.

The request to our hotline was from a pilot who rented a jeep and took a drive off of a main travel road. He soon realized the error in his way. He made a valiant attempt to dig himself out but with no luck. He walked to the closest town and talked to some others that were out of town, making a day trip to the area. They brought their F150 to where the jeep was and promptly got stuck themselves. After a couple more hours of digging, they called us asking for help. We reached out to the Northern California Recovery groups because this recovery was near Donner but no one was available. One 775 OFFROAD & RECOVERY member along with a local community citizen drove 90 minutes each way to get to the two vehicles. After a couple hours of work, both vehicles were on pavement headed home. 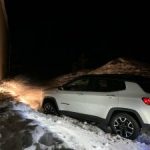 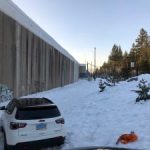